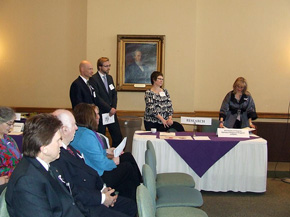 Epilepsy, which was regarded for centuries as the “Sacred Disease”, has started to come out of the darkness. March was celebrated in Canada as epilepsy awareness month, in which the public was educated about this neurological disorder that has still not been fully recognized as a disability. Epilepsy organizations teach people not to fear, but to understand and tolerate epileptic seizures. The 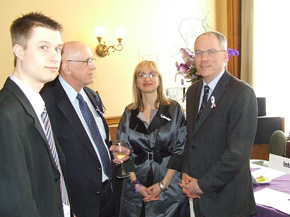 initiative to introduce “Lavender Day”, or “Purple Day”, was undertaken by 9-year old Megan Cassidy from Nova Scotia who has epilepsy. When Megan was first diagnosed, she felt alone and isolated. Then she decided to show kids and adults living with epilepsy that they are not alone. She proposed that all people wear the color of lavender on one day, March 26, as a symbol of support for those who are affected by the disorder. The color purple, or lighter lavender, symbolizes loneliness and isolation. 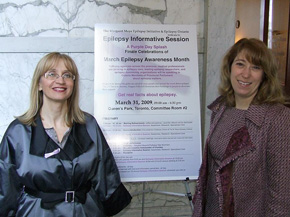 Margaret Maye is known by Polish people in Toronto as an excellent mezzo-soprano and actress, with training in both singing and acting. Until recently, none of Margaret’s other interests were known. Her son had his first convulsions 12 years ago, and on that day life changed completely for Margaret. For several years she has devoted her energies and talent to raising funds for the treatment of epilepsy and to inform people about epilepsy. As part of the “Margaret

Maye Epilepsy Initiative”, together with “Epilepsy Ontario”, she organized a large event on March 31, which concluded a month dedicated to epilepsy. She reserved a room in the Provincial Parliament (Queen’s Park) for the entire day, and called on politicians and people from the world of medicine to attend an “Epilepsy Information Session”.

In attendance were specialists in the treatment of epilepsy, representatives from research institutions, and representatives of social organizations. They were available all day to answer questions, and they held lengthy

discussions with attendees who also received a brochure and pages of information. Epilepsy sessions focused on three themes: awareness, research and care. Information tables were grouped according to these themes. 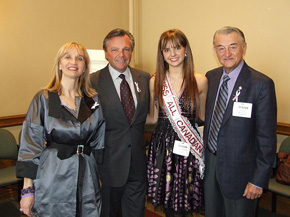 The experts were available from morning until noon. 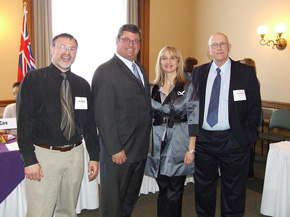 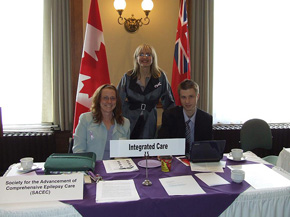 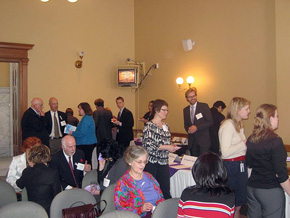 Also invited were guests from the Canadian Polish Congress 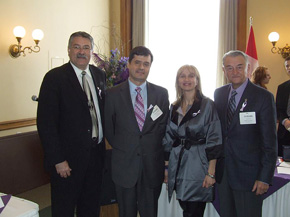 Prof. Dr. McIntyre Burnham said that the main objective of the session was to meet with polititians and raise their interest in epilepsy through conversation, and to establish contacts with representatives of organizations related to research on epilepsy. Researchers want epilepsy to be recognized by the Ministry of Health as a major physical affliction. Not all hospitals recognize the attacks of epilepsy 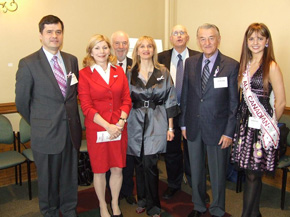 as a severe disease, with the result that people suffering from epilepsy do not receive benefits that are available to other persons deemed physically challenged. The biggest problem, which is always emphasized, is the lack of commitment of funds by the government for research into epilepsy.

After lunch there was a short concert performed by the cellist Carina Reeves. Carina is a graduate of the New England Conservatory of Music in Boston. Despite a very busy lifestyle Carina is a respected member of many well-known musical groups. She has played with many famous orchestras and ensembles. Margaret Maye explained that with this musical interlude she wanted to tell politicians that many famous people, including musicians, such as Ludwig van Beethoven, suffered from epilepsy.

After the musical program, 17 year old Joanna Klimczak, “Miss All Canadian Ambassador of Charities” from Niagara Falls spoke. Joanna is very active in local charities and international programs. She set up an organization, “Hand in Hand”, which she is the president of. She wants increasing awareness of epilepsy to be part of her program.

The session took place in a pleasant atmosphere. Throughout the day there was coffee, juice and mineral water, and at noon lunch was served with delicious Polish cold cuts, which gave a touch of Polish atmosphere to the session. Conversation continued from morning until the completion of the event at approximately 18:30.

aurel Broten MPP, who made it possible for the event to take place, has supported the initiative in Parliament. She delivered information about epilepsy to Parliament and arranged for lavender ribbons to be worn by the members of Parliament.

This is the second education session, to which Margaret Maye invited CPC Toronto District and the Polish Consul General. These sessions have been very helpful in understanding epilepsy.

It is hoped that the energy and efforts of Margaret Maye will lead to the discovery of medicines that will free her son and their house of unwanted guests which are frequent and not able to be cured by existing medicines: the attacks of epileptic seizures. When we see Margaret singing beautifully on stage, we realize that through her songs she has come out of the shadow of epilepsy.

The Canadian Polish Congress (CPC), Toronto District was formed in 1945. It is currently the largest CPC District in Canada having, as its members, 25 organizations under its umbrella. A full list of member organizations is available from the District Office. Persons wishing to join should contact the organization of their choice.